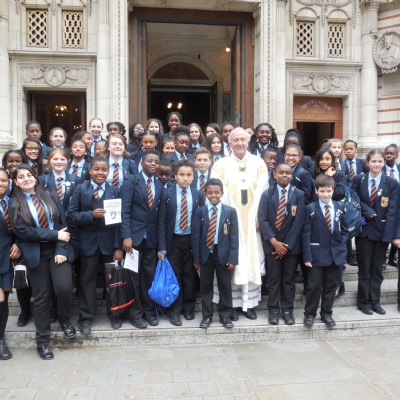 On Tuesday, 21 June 2016, fifty Year 7 pupils from St Thomas More were accompanied by members of staff to the Good Samaritan Mass at Westminster Cathedral.

The mass was presided over by Cardinal Vincent Nichols, Archbishop of Westminster, to celebrate the Year of Mercy.  Also attending were pupils from other schools in the Westminster Diocese and students from Kent and Essex schools. The mass was in aid of the Catholic Children’s Society - a charity that is well known to St Thomas More School.  Charitable work carried out by the school, throughout the year, including donations on Fridays and collections of dried goods, are in support of the charity.

During the offertory procession, Sofia Otalvaro Velasco and Daniel Espinoza Dume, both in Year 7, had the opportunity to present a cheque to the Cardinal on behalf of the school and they were presented with two commemorative candles to mark the Year of Mercy which were used during our St Thomas More Feast Day celebration on Thursday, 14 July 2016.

After the mass, all the pupils had the opportunity to view the Cathedral including walking through the Door of Mercy which they have learnt about during their RE lessons.  Pupils were presented to the Cardinal and also to the school’s former Deputy Head Teacher, Mr J.P Morrison, who is now Director of Education for Westminster.  It was a wonderful occasion and the pupils’ behaviour was impeccable.