Once again, the summer term brought us our annual Spelling Bee for Years 7, 8 and 9, tying up this term’s literacy focus which has been ‘spelling’.

Our first Spelling Bee saw Year 9 step up to the podium, a strong set of spellers who had reached the qualifying round with some impressive scores. Mr Abdou (Food Tech), Mr Williams (Science), Mr Ludlow (Maths) and Mr Andrews (English) joined their team members and instantly got to work. After a strong first round, pupils and their teachers demonstrated great teamwork as they collectively spelt our most challenging Words of the Day. The teacher round was particularly exciting, with all members of staff drawing on their knowledge from their subject areas to tackle some of the hardest spellings across the land (well done to Mr Ludlow on so accurately spelling ‘Zucchini’).

The teams were so tight towards the end that we opted for a bonus round. Mr Abdou and Mr Williams decided to put their teams on the line as they gambled their scores for a chance to be crowned Year 9 champion. Mr Williams came out on top with an extraordinary performance spelling ‘Pusillanimous’ perfectly. Congratulations to the Red Team who were the Year 9 Winners!

Our Year 8 Spelling Bee was a true spectacle. Superb performances from Daniel Ellis and Connor Glindon meant that the Blue Team charged to victory! Ms Whelan (English), Mr Ajayi (Science), Mr Hand (English) and Mr Andrews (English) all brought their own assets to their teams, but couldn’t match the clinical success of the Blue Team.  Well done to all Year 8 pupils  involved; Mr Turner, Head of Year 8 praised you for your efforts and behaviour throughout the competition. Until next year!

Our final Spelling Bee was for our Year 7 pupils. They were joined by their Head of Year Mr Wood, Ms Christodoulou (Assistant Had of Year/History), Mr Wunnerlich (Geography) and Mr Thorborn (History). Notable appearances from Mr Wunnerlich who spelt all of his words correctly, as well as Kevin Croospulle from the Orange Team for a strong performance.

In the end, the Orange Team flew to victory with the help of Mr Thorborn - well done Orange Team!

Congratulations to all of the Year 7 pupils involved - Mr Wood was delighted with your participation and support as a year group. We can’t wait for next year already  Well done to all runner ups and a special thank you to the teachers who gave up their time to join teams and help judge. 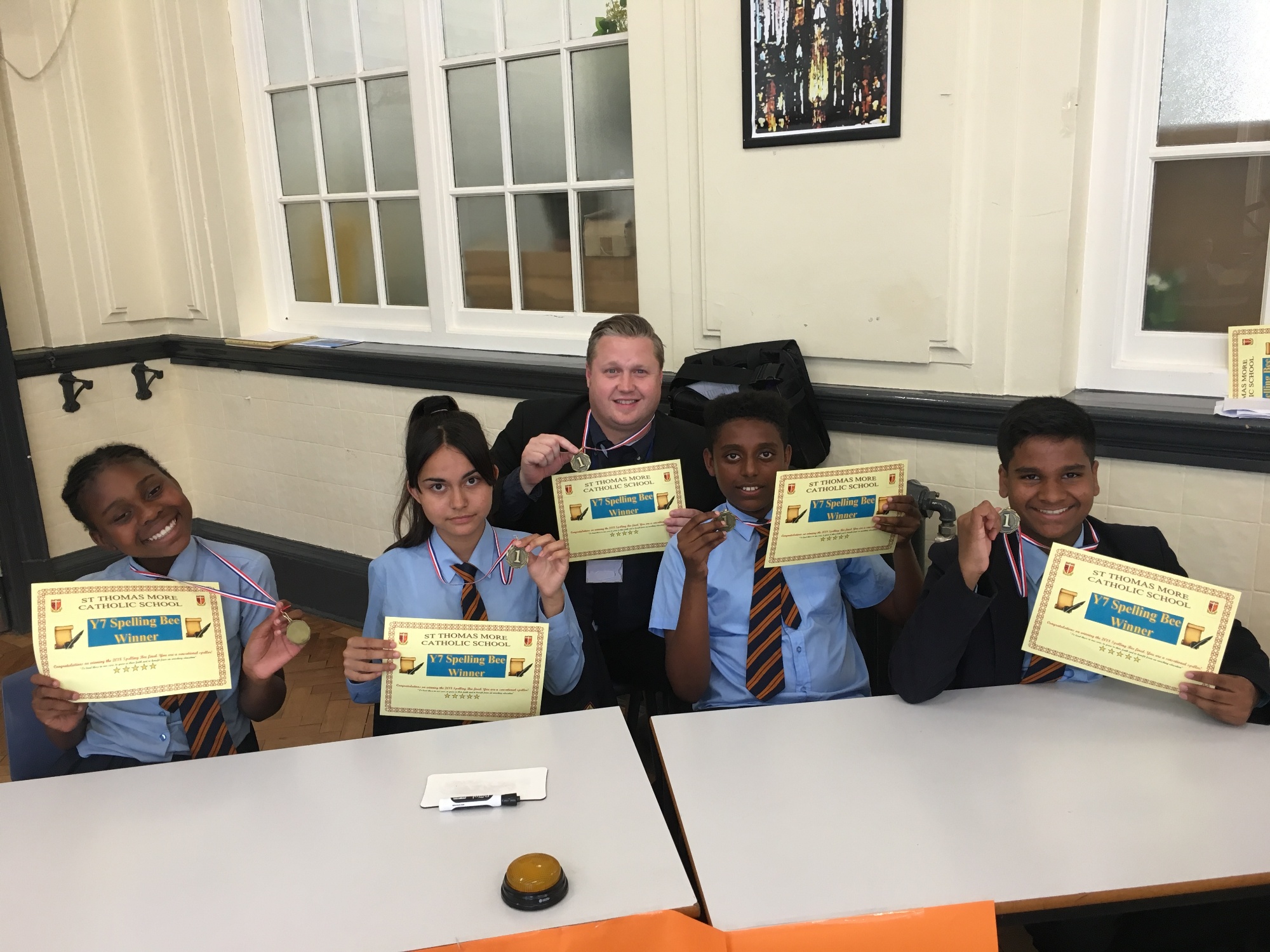