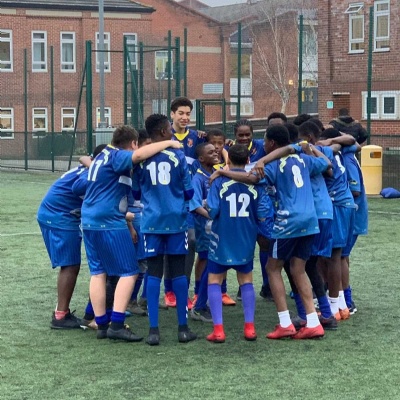 This week saw victory in football and rugby, as our second year group made it to the quarter-finals of the Middlesex Cup.

The Year 8 boys’ football team have become the second St Thomas More school year group to progress to the quarter-final of the Middlesex Cup this year. Jayshaun Bailey scored an exquisite left-foot strike into the bottom corner to put the team 1-0 up. Five minutes later, David Mpunga finished a 1-on-1 with the goalkeeper to make it 2-0. Their opposition pulled a goal back just after half-time to make it a tense second half. Rennie Gonzalez calmed the nerves of St Thomas More school by making it 3-1 with a finish through the goalkeeper’s legs. The opposing team pulled two goals back with seven minutes to go leaving St Thomas More stunned. In the final few minutes Rennie Gonzales passed the ball into the bottom corner securing a fourth goal for St Thomas More and sealing a place in the next round. The Year 9 boys’ football team has also progressed to this year’s Middlesex Cup quarter-final.

The Year 9 boys’ rugby team has made it to the semi-final of the National Cup after beating Robert Clack from Essex. After winning their previous fixture against Colne, the team were feeling exuberant and were confident they could obtain the victory. Several tries on the day from Raymond Osei, Ronnie Kabongo, Samuel Nwabuko, Jalil Wray and Ikenna Johnson ensured St Thomas More won the game 36-28. Their next opposition to secure a place in the final will be Howard of Effingham school in Surrey. This is a fantastic achievement for the team!